Max Verstappen will go to the final race of the 2021 FIA Formula One World Championship level on points with title rival Lewis Hamilton after finishing second behind the Mercedes driver in a hugely dramatic Saudi Arabian Grand Prix.

ExxonMobil’s 100th race with Red Bull Racing Honda was action-packed and featured two re-starts, one safety car period, numerous virtual safety cars and a controversial collision when Hamilton ran into the back of Max’s car when the Dutch driver tried to obey a race control ruling to hand the lead back to the Mercedes driver.

At the start of the race Max made a good getaway from third place on the grid, but ahead of him both Mercedes also made good starts and as the field headed towards turn one Hamilton led ahead of Valtteri Bottas and Max.

When Mick Schumacher hit the wall, a safety car was deployed and Mercedes opted to pit Hamilton and the race leader took on hard tyres in a 2.8-second stop. The Team covered that by pitting Checo from P5 and after his stop for hard tyres he re-joined in an eventual P8.

Subsequently, Race control deemed the damage too much and red flagged the race, swinging the race towards Max as under red flag rules, the Team was permitted to change Max’s tyres. He would take the re-start from P1 and on fresh tyres.

When the lights went out, it was again Hamilton who made the best getaway and he pulled ahead of Max into turn one. Max braked late and tried to hang on around the outside, but he went off track as he took the lead. Max’s move also allowed Ocon to sneak past Hamilton and steal second place.

Starting from P8, Checo got squeezed badly, though initially he managed to avoid contact with the cars on either side. However, there was nothing he could do when Leclerc tagged the Red Bull, spinning him into the wall and out of the race.

With a number of other cars colliding there was significant debris on track and as a result the red flags were flown again.

Discussing his race, Sergio Perez said: “It wasn’t the best weekend for the Team, we lost crucial points in the Constructors’ Championship, so we are going to Abu Dhabi now to try and turn things around.

“We were slightly unlucky with the first red flag but we got away well after the second restart. We got past Gasly and Charles and as I was coming out of turn three there just wasn’t enough room for everyone, given how the corner was. I ended up tangling with Charles, he clipped my rear tyre with his front right tyre.

“There is still optimism and something to fight for and we will give the final race of the season everything so let’s look forward.”

After the incident at the first re-start, Race Control promoted Ocon to first place with Hamilton second and with Max directed to start from third place.

When the lights went out for a third standing start, it was Max who made the best start. The Red Bull driver reacted 0.01s quicker than Hamilton and as the Mercedes driver tussled with Ocon, Max dived to the inside and slipped past his title rival in turn one. And with momentum on his side, he then powered past Ocon on the run to turn three to brilliantly take the lead.

The front pair then rapidly pulled away from the Alpine but the drama continued on lap 37. Hamilton closed in and attacked on the pit straight. The rivals tangled in turn one and Max left the track as he held the lead. The Red Bull driver was told to cede the lead but when he slowed on track to do so, Hamilton, seemingly unaware that the instruction had been given, did not slow enough and slammed into the back of the Red Bull.

On the breathtaking race Max Verstappen explained: “There was definitely a lot of action today, a lot of things happened. I was told to give the position back, so I moved off the racing line and slowed down, Lewis just stayed behind me, I don’t understand why he didn’t pass. I don’t agree with the five-second penalty, but it is what it is and we’ll just move on.

Max powered away into the lead again, but once more handed the place back. And after being handed a five-second penalty for leaving the track and gaining an advantage, and with his tyres fading, Max settled for second place.

Commenting on the race, Team Principal Christian Horner commented: “There was obviously an awful lot of damage and debris for Race Control to deal with because of all the incidents, so it was a frustrating race in that respect and we were probably lucky to come away with second, especially given the amount of damage we had to the back of our car.

“I don’t know what Lewis was doing because Max was trying to give the place up as instructed by Race Control, he lifted and you can hear that, it was clear we were trying to give the place up and we’d informed Race Control.  I don’t know if Lewis didn’t want to pass before the DRS zone, but it was very strange to have him drive straight up the back of Max. We got a five second time penalty, I thought it was on the harsh side, they both went wide and were racing.

Max has fought like a gladiator this weekend and given it everything. It was frustrating to drop points in the constructors’ championship with Checo being taken out at the restart, so we now have one chance.

“We have a week to regroup and now it goes down to the wire at Abu Dhabi. It’s a straight-out fight as it has been for the entire year. For the fans it is fantastic, it keeps the championship dream alive and we have one shot and it’s time to take it.”

ExxonMobil celebrated a centenary of races with Red Bull Racing Honda at the inaugural race in Jeddah. To celebrate the milestone, ExxonMobil showcased the personnel behind the partnership by replacing the branding on the fuel bowsers with many of the faces of employees who have and continue to bring the partnership to life. To find out more click on the image below: 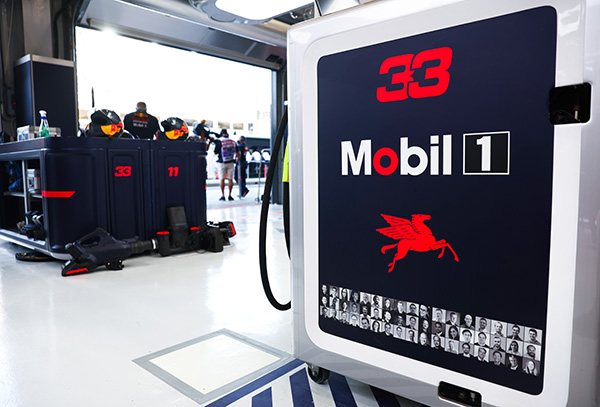 All eyes will be on the Abu Dhabi GP next weekend for the final race of the year on a revised track.  Max Verstappen and Lewis Hamilton are on level points but the Dutchman edges the Briton having won one more race. Checo’s DNF means that the team lose points to Constructors rivals Mercedes who now lead the championship by 28 points.

The 2021 season is one of the most compelling in recent years and ExxonMobil continue to support Red Bull Racing Honda's fight in the Drivers and Constructors Standings.