Hydraulic fracturing allows companies like ExxonMobil to access abundant unconventional oil and natural gas resources, enabling a resurgence in energy supplies that are being brought to global markets in a safe, reliable and responsible manner.

In unconventional reservoirs such as shale, oil and natural gas are contained in very small pores, about 2,000 times narrower than the width of a human hair. Hydraulic fracturing is the process of pumping a combination of mostly water (to make small fractures in the rock) and sand (to prop open the cracks) to release the embedded oil or natural gas to enable its flow into the wellbore. Before this process can take place, however, a well must be constructed with multiple layers of steel casing and cement in order to isolate the fluids in the well from other formations, including those which contain sources of groundwater. This is not only a sound operating practice, but also a standard regulatory requirement.

Hydraulic fracturing fluid is typically comprised of approximately 98 to 99.5 percent water and sand and 0.5 to 2 percent chemical additives.

All industrial processes have risks, and drilling for unconventional oil and gas is no different. We understand stakeholders are concerned about these risks, including those related to hydraulic fracturing fluids and wastewater, well casing and groundwater, vehicle traffic, air emissions and other related effects. These are important concerns, and we know we must respond to them in every community in which we operate and reach out to communities to ensure our responses are effective.

ExxonMobil analyzes every significant operation the Corporation undertakes through our Operations Integrity Management System (OIMS). Applying OIMS requires us to identify potential safety, environmental and social impacts and to implement procedures and processes to mitigate risks. At XTO Energy Inc. we fully implement OIMS while we carry out our risk-based, focused and deliberate execution strategy.

Safety in our Operations

We are committed to conducting business in a manner that is compatible with the environmental and economic needs of the communities in which we operate, and that protects the safety, security, and health of our employees, those involved with our operations, our customers, and the public.

Our system for measuring and mitigating risk is called OIMS (Operations Integrity Management System) and today guides every operating decision we make on a daily basis.

The term Operations Integrity (OI) is used by ExxonMobil to address all aspects of its business that can impact personnel and process safety, security, health, and environmental performance.

ExxonMobil’s shale gas development and production activities are guided by proven policies, industry guidelines and practices, as well as more than 60 years of experience in hydraulic fracturing. We work with state governments and multistate entities to address concerns, establish effective regulatory frameworks and implement industry consensus on sound management practices.

A vital component of building community trust is transparency of operations. We support the disclosure of the ingredients used in hydraulic fracturing fluids, including on a site-specific basis. In the United States, disclosure appears on the publicly accessible FracFocus.org website, an effort between the Ground Water Protection Council and the Interstate Oil and Gas Compact Commission. Launched in April 2011, ExxonMobil and others in industry have voluntarily submitted data from more than 120,000 wells. In Canada, the public can access FracFocus.ca for industry disclosures and ngsfacts.org for disclosures in Europe.

Water use for hydraulic fracturing

Water management is an important aspect of hydraulic fracturing operations. Water use by basin differs due to geologic and reservoir characteristics and optimization of drilling and completion designs. For example, a Williston Basin well in North Dakota requires about 6 million gallons of water for hydraulic fracturing, whereas a Permian well in western Texas requires about 15 million gallons.

ExxonMobil is actively engaged in water research and collaboration. ExxonMobil conducts its own research and has a team of engineers and scientists at ExxonMobil Biomedical Sciences and its Upstream Research Company who are routinely evaluating emerging water-management opportunities.  In association with the University of Texas Bureau of Economic Geology, ExxonMobil has also supported an evaluation of water trends associated with the transition from conventional to unconventional oil production in the Permian Basin.  Additionally, ExxonMobil is engaged in various industry-led water management initiatives including the Energy Water Initiative, which is a collaborative effort of the U.S. oil and natural gas industry to study, describe, and improve life-cycle water use management in upstream unconventional oil and natural gas exploration and production. 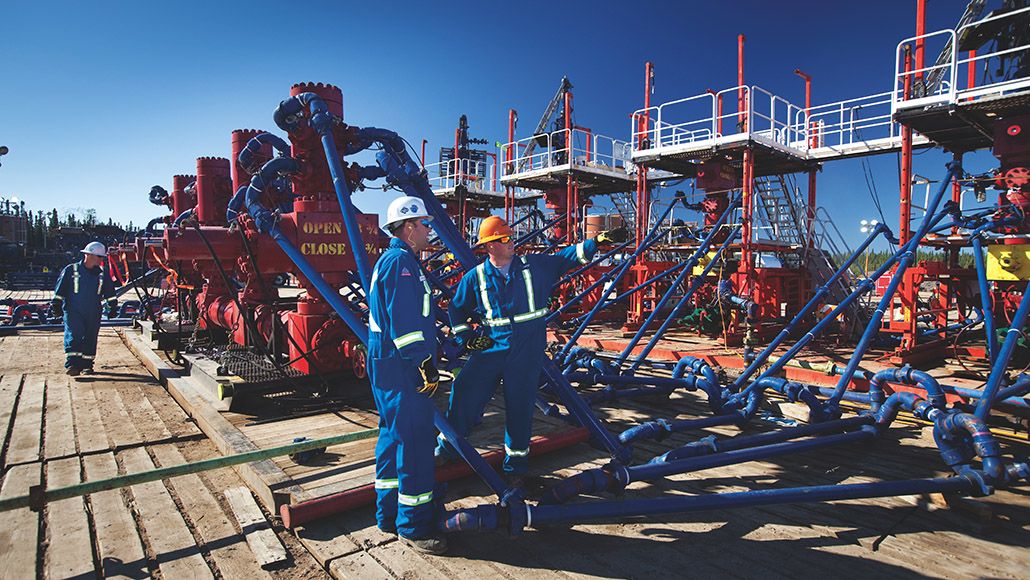 Throughout the entire unconventional oil and natural gas life cycle, from exploration to decommissioning, care is taken to minimize the disruption to the community and protect the environment.

The production processes of the refineries and chemical factories are accompanied by the emission of a number of harmful substances.

ExxonMobil devotes a great deal of attention and expertise to controlling waste, ground contamination and nuisance.